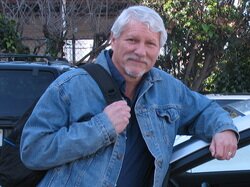 Ken Williams has worked for over thirty years for the homeless of Santa Barbara.  He has a wealth of experience working with the mentally ill, alcoholics/drug addicts, war veterans, the infirmed, neglected, and survivors of sexual violence. He can be counted among those who have reached out to help the new lepers of our time.  Ken uses these experiences as sources and inspirations for his novels, screenplays and articles.  Ken Williams also served in combat with the 9th Marines—better known as The Walking Dead in Vietnam.

Writing Credentials:   Ken is a columnist with noozhawk.com.  Several news outlets, including the Santa Barbara Independent and the News-Press, have published his work.  Ken also has two published novels: China White and Shattered Dreams, A Story of the Streets.  His nonfiction book: There Must Be Honor is a collection of Ken’s own articles interwoven with his autobiography.  His most recent work is Fractured Angel.

Films: “Shelter,” a documentary of Ken’s work produced by Paul Walker—actor: Fast and the Furious,Flags of Our Fathers and Brandon Birtell; also “Streets of Paradise.”